HomePress ReleasesVermont Collects 114,000 Pounds of Batteries for Recycling in 2016 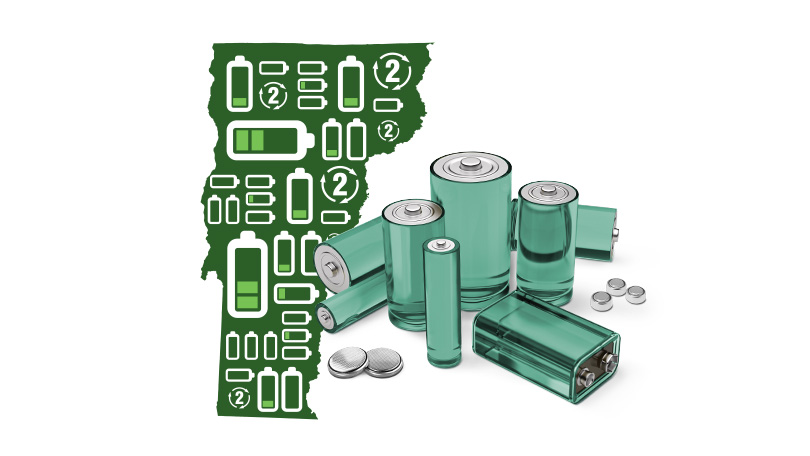 Montpelier, VT– February 9, 2017 – Call2Recycle, Inc., the appointed battery stewardship organization in Vermont, announced  over 114,000 pounds of batteries have been collected statewide in 2016.  This is a 187% increase from the previous year, prior to the legislation that led Vermont to become the first state in the U.S. requiring producers to finance a collection and recycling program for single-use (primary) batteries.

Providing easy and convenient recycling options to Vermonters has contributed to this success, including adding to its drop-off network and increased participation by municipalities.  Today, more than 96% of Vermont residents live within 10 miles of one of Call2Recycle’s public drop-off locations.

“We are extremely pleased with the collection results in Vermont in year one. By simplifying battery recycling for single-use batteries, we’ve also seen a 42% increase in rechargeable collections,“ said Todd Ellis, Director Stewardship Programs for Call2Recycle, Inc. “We know Vermonters will continue the momentum generated into increasing the number of batteries kept out of landfills  in 2017.”

The success in Vermont contributed to Call2Recycle, Inc., North America’s first and largest battery stewardship and recycling organization, record-setting year where 14 million pounds (6.3 million kilograms) of batteries and cellphones were collected and recycled throughout the U.S. and Canada in 2016.

“Thanks to the support of our dedicated industry stewards and collection partners, Call2Recycle’s program has achieved unprecedented success through increasing consumer awareness,” said Carl Smith, CEO & president of Call2Recycle, Inc.

The continued year-over-year growth of the battery stewardship program is a result of strong, collaborative relationships between Call2Recycle and its robust network of committed industry stewards and collection partners, including retailers and municipalities. For more information on drop-off locations and battery recycling in Vermont please visit www.call2recycle.org/vermont

Call2Recycle, Inc. is committed to protecting and preserving the environment through collecting and recycling consumer batteries and cellphones. Founded in 1994, the not-for-profit organization works on behalf of stakeholders to provide its battery-recycling program to consumers across the U.S. and Canada through almost 30,000 convenient drop-off locations.